SportsChattogram Test enters the last day as Bangladesh managed to survive on...
By: News Desk 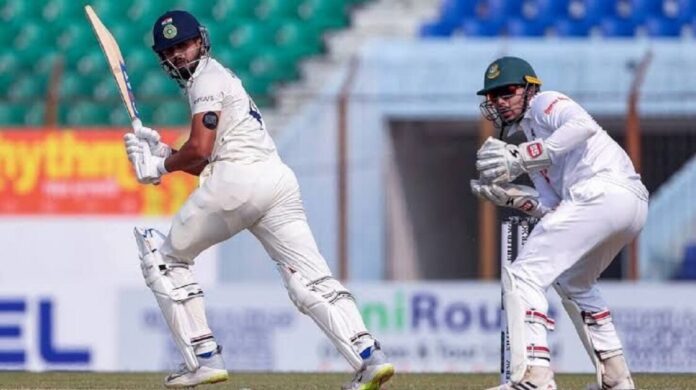 Bangladesh lost six wickets on the score of 278 runs at the end of the fourth day of the first of the two-match Test series against India. Skipper Shakib Al Hasan and star all-rounder Mehidy Hasan Miraz went unbeaten on the individual scores of 40 and 9 runs respectively.

Earlier, the opening pair of Najmul Hasan Shanto and debutant Zakir Hasan provided a strong foundation of 124 runs for the first wicket in favor of Bangladesh. Eventually, senior pacer Umesh Yadav came up with a breakthrough in the 47th over of the match.
Following that, the star all-rounder Axar Patel scalped three wickets to put the hosts on the back foot in the match. Apart from Axar, veteran all-rounder Ravichandran Ashwin and first-innings hero Kuldeep Yadav also claimed one wicket.

Here’s what happened so far in the match

During Bangladesh’s run chase in the second innings, debutant Zakir Hasan smashed his maiden Test century to keep his team alive in the match. Other than him, another opener Najmul Hasan Shanto also played a crucial knock of 67 runs.

Prior to the run-chase of Bangladesh, the Indians happened to declare their second innings on the score of 258 runs for the loss of two wickets. The young opener Shubman Gill managed to reach his maiden Test hundred with 10 boundaries and three sixes to his name. He was accompanied by the Test specialist Cheteshwar Pujara who played a knock of 102 runs off 130 balls.

Previous article
Authority in Noida to resume the demolition process on Yamuna Floodplains
Next article
FIFA World Cup 2022: Argentina vs France, a battle to clinch the FIFA title for third time