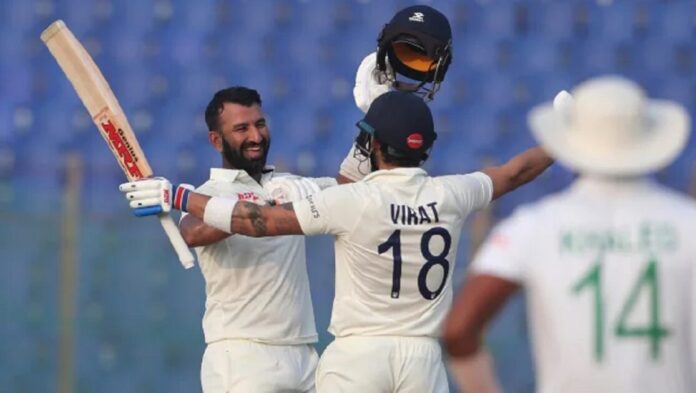 India and Bangladesh are locking horns in the series opener of the two-match Test series. Both teams are playing this match at Zahur Ahmed Chowdhary Stadium in Chattogram. Speaking of the game on the third day, the Indian team managed to dominate another day, thanks to the brilliance of Shubman Gill and Cheteshwar Pujara.

Talking about the staring of the third day, the previous day’s hero Kuldeep Yadav completed his five-for. The performance was quite special for the Kanpur-based prodigy as he is making his comeback after a long wait of 22 months in the Tests.

Riding on the brilliance of Kuldeep, the Indian bowling attack bundled up the visitors only on the score of 150 runs in the first innings and took the lead of 254 runs before going into the second innings.

Here’s what happened on the third day of the match

India started their batting in the second innings and there was yet another poor display of batting from the stand-in skipper and senior batter KL Rahul. He could score only 23 runs and fell prey to the Bangla pacer, Khaled Ahmed, for the second consecutive in the same Test.

Following Rahul’s departure, Pujara and Gill took the charge to stitch a brilliant partnership of 113 runs for the second wicket. The 23-year-old young opener Gill smashed his maiden Test Ton with a knock of 110 runs including 10 boundaries and three sixes to his name.

Whereas, senior Test specialist batter Cheteshwar Pujara smashed a Test Ton after a long wait. He scored his career’s quickest Test century with 102 runs off 130 balls having 13 boundaries to his name.

India happened to declare their second innings on the score of 258 runs for the loss of two wickets on the third day of the Chattogram Test. While chasing the target of 513 runs, Bangladesh ended up on 40 runs at the end of the third day and now requires 471 runs to win against the visitors.