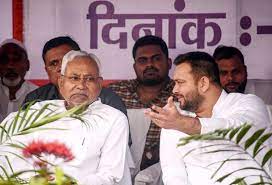 Patna: Bihar Deputy Chief Minister Tejashwi Yadav has trashed all speculations about Chief Minister Nitish Kumar’s return to the Bharatiya Janata Party (BJP)-led National Democratic Alliance (NDA) and made it clear that the “Mahagathbandhan” is very strong and it will remain so. Tejashwi Yadav, the heir apparent of the Rashtriya Janata Dal, has said that his party enjoys the full support of alliance partners and looks forward to winning the by-elections to two assembly seats: Mokama and Gopalganj. The by-elections will be held next week.

He said that all coalition partners decided that the RJD should contest both seats, because the RJD candidate had won from Mokama and Gopalganj was his native district and he was confident of Mahagathbandhan’s victory in both the constituencies. Yadav made the statement to reporters at Jehanabad on Monday when he was there to attend the death anniversary of a party colleague who recently passed away. The Mokama seat has fallen vacant after the disqualification of sitting MLA Anant Kumar Singh. He has been charged with keeping arms and explosives. His wife Neelam Devi got the party ticket to contest the election. In Gopalganj, Kusum Devi is trying to retain the seat of late husband Subhash Singh. She has been pitted against Mohan Gupta of the RJD.