Gas cylinder exploded: Satna exposed to a horrifying accident on first day of the new year 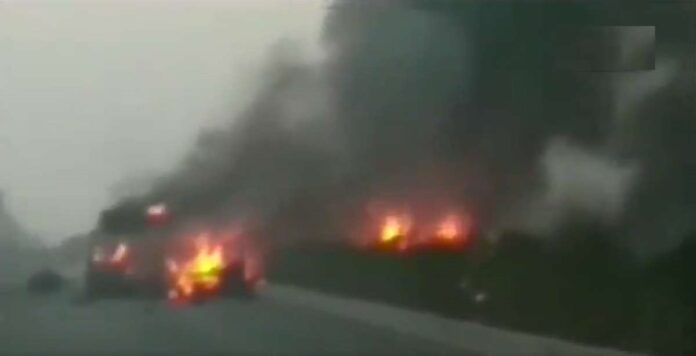 Satna Madhya Pradesh: In Satna, Madhya Pradesh, on the first day of the new year, there was a huge blast in the beach market, due to which sensation spread in the area. An LPG cylinder exploded at a hotel near Chandni Talkies in the city. The explosion was so strong that its sound was heard far away.

The fire started with the explosion. A cloud of fire could be seen rising from a distance. However, the good thing is that there was no loss of life in this incident.

According to information, two LPG cylinders exploded simultaneously on Sunday morning in a hotel near Chandni Talkies located in the City Kotwali police station area. The blast in the densely populated area spread panic among the people.

On seeing the fire, other people present there including both the brothers ran outside. After a few seconds, there were two explosions one after the other and flames started rising from the shop. It is being told that 3 cylinders were kept in the shop, out of which 2 exploded.

The building cracked in the accident and the goods have been burnt to ashes. The good thing is that due to Sunday, most of the shops in the market were also closed and due to morning time, there was no crowd, otherwise there could have been a stampede.

The shop operator Durga Prasad Kesarwani is deeply shocked due to the cylinder blast in the shop and everything being gutted in the fire. His health deteriorated after the accident.

He has been admitted to the district hospital for treatment. It is being told that this shop was the only means of earning livelihood for Durga Prasad and his brother Sunil. Both the brothers were in the shop when the fire broke out in the morning. Everything was burning to ashes in front of his eyes and he was unable to do anything.

Assistant Fire Safety Officer RP Singh Parmar said that on receiving information about the fire in the shop due to a cylinder blast, personnel was sent with fire engines. The fire has been brought under control. Two LPG cylinders are torn here.

Previous article
Mall employee killed by brick accident on UP-Delhi border: Brick and liquor bottle found lying near the dead body
Next article
Round table Lunch soon to be organized in Indore: Along with PM Modi President Murmu will take part