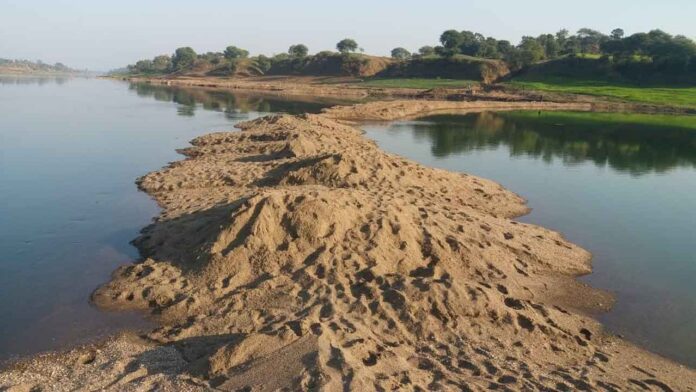 The company is giving royalty only on paper for eight, nine, and ten cubic meters of area kept for mining.

Nasrullaganj (MP): A contractor from Devas, which has been given a contract for mining at Chichli in Nasrullaganj, is barely paying any royalty to the government. As a result, it has caused a huge loss to the government coffers, official sources said.

The contractor from Devas is paying royalty only on paper for eight, nine, and ten cubic meters of area kept for mining.

Besides, the contractor is allegedly harassing the vehicle owners from other districts, who pay valid royalty for 14 and 16 cubic meters area set aside for sand mining. The vehicle owners are harassed at Deepgaon and Sandalpur Nakas.

The muscle men of the contractor are allegedly extorting money from the drivers of the vehicles that carry legally mined sand.

Those people are even assaulting the drivers and abusing them.

According to sources, the Nakas run at Sandalpur and Deepgaon, are not legal.

An incident occurred at Sandalpur on Tuesday night when policemen from Khategaon parked an under-loaded vehicle, but an overloaded vehicle of Devas contractor was allowed to go.

Enraged by the incident, the truck drivers blocked traffic on Sandalpur road and created a ruckus.

The contractor concerned is giving royalty to the vehicles from Hathner Tehsil, Kannaud. On the other hand, vehicles loaded with sand from the mines in Cheechli Daiyad are allowed to go, sources further said.

Besides, Khategaon-via-Chapra is mentioned in the royalty of Hathner. Although the root is illegal, the police are not taking any action, sources further said.

Consequently, the owners of valid vehicle owners are facing problems.

When the issue was raised before mining officer, Rajendra Singh Parmar, he said that as he had no knowledge about it, but as he was informed about the issue, he would take action.