One dies, many sustain injuries as bus overturns in MP’s Katni 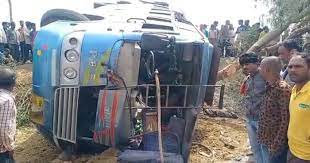 The accident occurred when the bus carrying 30 people was going to Janjatiya Gaurav Divas in Shahdol. The MP government, led by the BJP, is organising the event on the occasion of the birth anniversary of freedom fighter Birsa Munda.

Jabalpur (MP): A 22-year-old man died and several others suffered injuries after a bus taking 30 tribal people to a function “Janjatiya Gaurav Divas” overturned in the Katni area of Madhya Pradesh’ Jabalpur district on Tuesday morning, the police said.

They were going to take part in an event held to mark the birth anniversary of freedom fighter Birsa Mundaz in Shahdol district of Madhya Pradesh. The man has been identified as Ashushu Kol.

MP Congress Committee president Kamal Nath expressed grief over the incident. He said that one person had died and several suffered injuries after a bus carrying people to Janjatiya Gaurav Divas programme turned turtle. He said, “May God bless the departed soul. I wish speedy recovery for the injured.”

President Droupadi Murmu, who was the chief guest at the function organised by the BJP-led MP government in Shahdol, arrived at Jabalpur airport. Governor Mangubhai Patel and Chief Shivraj Singh Chauhan welcomed her. The President is on a two-day visit in the state on the occasion of Birsa Munda’s birth anniversary.

President Murmu is on a two-day visit to the state on the occasion of Birsa Munda’s birth anniversary.

The president would arrive in Bhopal after addressing the gathering in Shahdol.