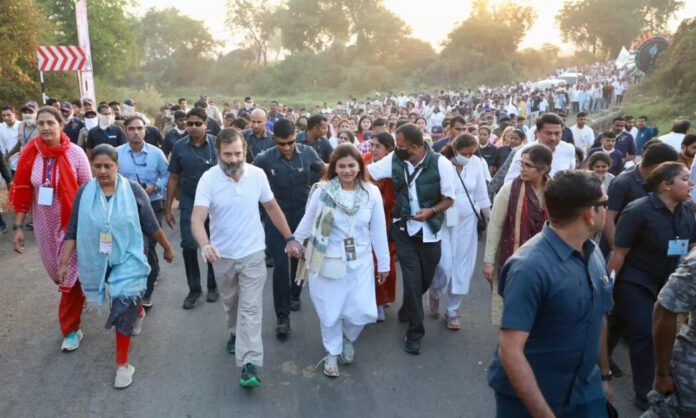 Bhopal: The Congress’s Bharat Jodo Yatra led by Rahul Gandhi is all set to enter Madhya Pradesh on Wednesday, party sources said on Tuesday. MP is the first Hindi heartland where the Yatra is entering. General secretary of the party Priyanka Gandhi may join the Yatra in the state, a senior party leader Jairam Ramesh said.

If that happens, Priyanka will join the Yatra for the first time, he said during an interaction with journalists. The Yatra which began from Kanyakumari on September 7 has passed through Tamil Nadu, Kerala, Karnataka, Andhra Pradesh, Telangana and Maharashtra. The Yatra completed its Maharashtra leg on Monday.

When Rahul Gandhi is in MP, he will visit Ujjain’s Mahakaleshwar temple. He will also visit the birth places of tribal leader Tantya Bhil in Khandwa and BR Ambedkar in Mhow.

The Congress, in the meanwhile, flagged off its 18th sub-yatra from Bhopal. It will reach Susner in Agar-Malwa region on Thursday. The party has, so far, taken out 17 Yatras which are on their way to merge with the Bharat Jodo Yatra.

Previous article
UP govt prepares for Maha Kumbh in 2025
Next article
Provocation forced me to hit Shraddha: Aftab

Shillong: Six persons, including a forest guard, were killed...