SportsBhambri and Ramanathan steal the show by winning preliminary round in The...
By: News Desk 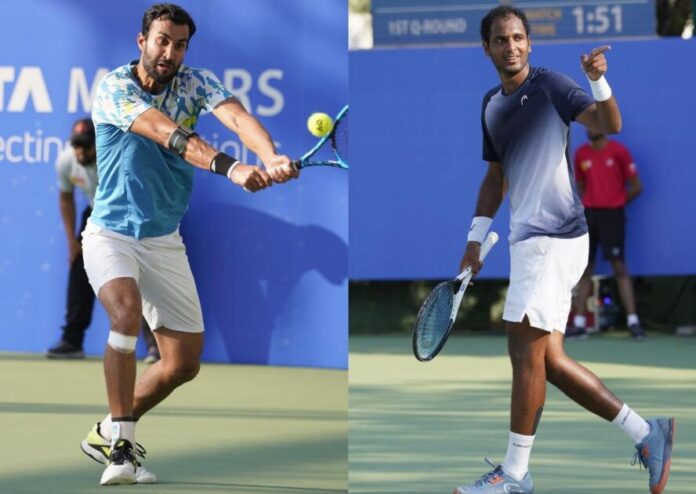 Indian players Yuki Bhambri and Ramkumar Ramanathan started their campaign by winning the singles qualifying preliminary round in the fifth edition of The Tata Open Maharashtra at the Balewadi Stadium in Pune on Saturday.

While Bhambri dominated Diego Hidalgo 6-2, 6-2 in a one-sided match, Chennai’s Ramanathan, who entered with a wildcard, made a comeback after trailing against Otto Virtanen to win 2-6, 7-5, 6-2.

South Asia’s only ATP 250 event, Tata Open Maharashtra is being organized by Maharashtra State Lawn Tennis Association (MSLTA) in Collaboration with the Maharashtra government in Pune for the fifth year. Meanwhile, the other three Indians in action – Prajnesh Gunneswaran, Siddharth Rawat, and Aditya Balsekar – lost their respective matches.

While Gunneswaran lost 7-6 (6), 3-6, 7-5 against former word no. 45 Maximilian Martyrer, Rawat worked hard before losing the match to Zdenek Kolar 6-1, 6-7 (4), 6-1. Flavio Koboli defeated Balsekar 6-3, 6-0. Elias Yamer, who reached the semi-finals last year in other matches of the first round, advanced to the next round with the retirement of his opponent Miljan Jacic.

Matia Bellucci defeated Vladislav Orlov 6-4, 6-4 and Nikola Milojevic defeated Nicolas David Lonel 6-3, 6-2. The second and final round of qualifiers will be played on Sunday and Bhambri, Ramanathan, and others will be eyeing a win and securing a place in the main draw for themselves. Bhambri and Ramanathan will face Yamer and Bellucci respectively in the final round.

Earlier in the day, 15-year-old emerging India star Manas Dhamne was given a main draw wildcard in singles with the announcement of the draw. Pune-born tennis player Dhamne will be seen competing in the main draw with global tennis stars, including world number 17 Marin Cilic. The main draw will be held from January 2 to January 7.