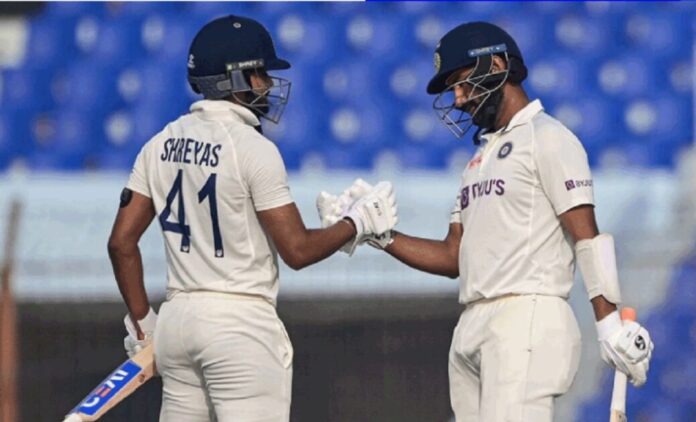 India and Bangladesh locked horns in the first of the three-match Test series at the Chowdhary Zahur Ahmed Stadium in Chattogram. The Indian team went into the field under the captaincy of stand-in skipper KL Rahul as regular skipper Rohit Sharma was ruled out of the first Test due to his thumb injury.

Indian team opted to bat first after winning the toss in Chattogram. Although the visitors couldn’t get a good start as their top three fell down early on the total score of 48 runs but Rishabh Pant’s short cameo of 45 runs followed by the brilliant partnership between Shreyas Iyer and Cheteshwar Pujara rescued the team India from a miserable position in the match to a commanding one.

At the end of the day’s play, the Indian team posted a total of 278 runs for the loss of six wickets. Interestingly, the Indians lost their last wicket on the last ball of the day.

Speaking of the Indian batting lineup, Cheteshwar Pujara scored 90 runs alongside an 82-run knock from Shreyas Iyer. The duo stitched a partnership of 149 runs for the fifth wicket to help India reach a decent total of 278 runs on the first day of the first Test match of the series against Bangladesh.

Whereas the stand-in skipper and senior batter KL Rahul failed once again to live up to the expectations and could score 22 runs before falling prey to Khaled Ahmed.