NationalDefence Minister Rajnath Singh appreciates the bravery of Indian Army after a...
By: News Desk 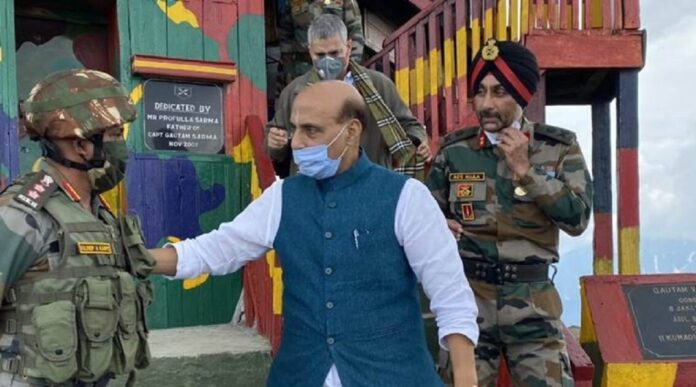 Once again the world witnessed the India-China clash when 600 Chinese tried to illegally enter Indian soil. Defence minister Rajnath Singh later said in the parliament on Tuesday, December 13, that the Indian Army reverted back strongly and the Chinese were sent back they were stopped from making from snatching lands in Arunachal Pradesh.

According to the information received The defence minister later said that there was a clash between the Indian army and the People’s Liberation army. He further confirmed that there has been no casualties but the scuffle led to injuries on both sides.
Singh later appreciated that the Indian army bravely retaliated and was successful in sending back the Chinese army behind.

The defence minister was quoted while saying that the Indian troops squared up the attempt in a “firm and resolute manner”, and Chinese personnel had to return back due to the timely intervention from the Commanders of the Indian Army.

He further addressed that the government are doing constant dialogues in a diplomatic way but if needed Indian Army is ready to retaliate and fight back.

According to the information received the clash between the two sides began on 9th December and several soldiers sustained serious injuries and are currently admitted to a hospital in Guwahati.

There had been clashes earlier too between Indian troops and the People’s Liberation Army at Galway valley in Eastern Ladakh in which 20 Indian soldiers sacrificed in the line of duty and several were injured.