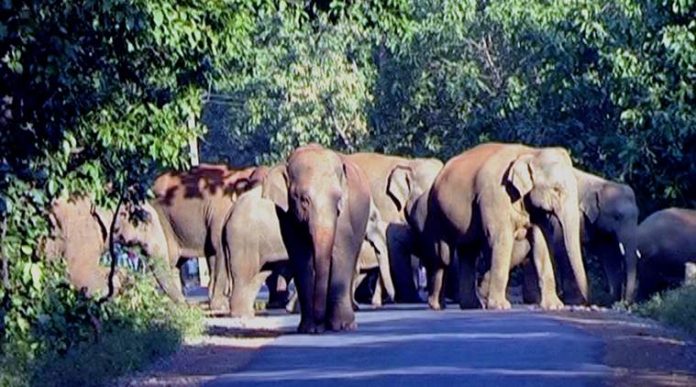 Korba (Chhattisgarh): After the residents of a village in Korba district of Chhattisgarh killed a calf of an elephant, a herd of angry jumbos went on the rampage and trampled a villager, forest officials said on Friday. According to divisional forest officer Premlata Yadav, locals killed a one-year-old elephant calf and buried it in a field at Bania village under Pasan forest range a few days ago.

Enraged by the killing, a herd of 44 elephants to which the calf belonged entered the nearby Devmatti village on Thursday night and trampled Pintawar Singh and his three cattle. When the incident occurred, Singh was in the cattle shed. The official urged the villagers to remain alert and not to go near the herd. A team of foresters visited the Bania village.

Yadav further said that the villagers had killed the calf and buried it in a field where fresh paddy had been planted to hide the carcass which the foresters dug out. The owner of the farm where the calf was buried was detained. A sum of Rs 25,000 has been given to the family members of the man who was killed by elephants in Dematti village. The remaining amount of Rs 5.75 lakh will be given after the formalities are completed, Yadav said.

The villagers said that the herd of elephants damaged crops on 22 acres in three villages. The northern Chhattisgarh has often seen many incidents of human-pachyderm clash, but such incidents are taking place in the central region of the state. According to sources in the forest department, in the past three years the elephants have killed 210 people. Similarly, 47 elephants died in the past four years. Two elephants – one in Korba and another in Raigarh districts of the state – were recently found dead.

Relationship marketing is a marketing strategy that comes under the area...